Special thank you gift for my 2000th visitor..

I checked out the ol' blog today, and saw that I was at a whopping 1750 pageviews! If you happen to be my 2000th visitor and send me a screenshot as proof, I'll take your request for a quick thank you sketch in your honor! Thanks a million for coming back to take a look at my stuff. As always, it's much appreciated. =D
Posted by Unknown at 5:34 PM No comments:

I really like mashups. I'm not even really sure what it was that brought me in this direction, but I thought it was pretty cool. Sometimes with these sketches, I just sit down and let the drawing take me where it wants to go. 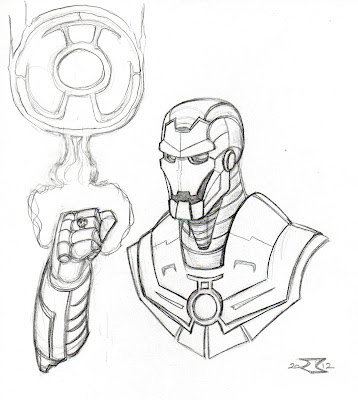 For my friend, Brian

A buddy of my is leaving for Istanbul in under a month, for an extended period of time, and he asked me if I'd do a Quicksilver sketch for him. The first thing that pops into my mind when it come to Quicksilver is "haughty, contemptuous asshole", and I think I was able to get that across, which is ALWAYS a bonus. Here's to hoping that he digs it! =)

Bad movie night at the Friendhole. Zardoz. What more needs to be said?? (except that for some perverse reason, I really like drawing Sean Connery in a man-thong LOL!) It's a WIP at the moment and yes, the gun is buggered. I'll fix it once I get a chance to sit down with some reference, and I'll post the finish here, as usual. =) 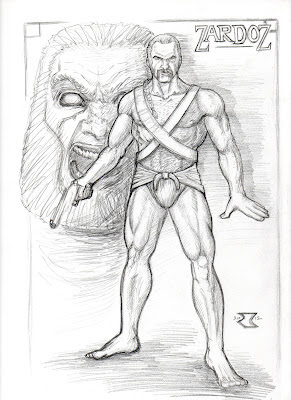 Knocked out a few more this week, usually on impromptu requests, or based on something that inspired me at the time. Enjoy! =)

Knocked this out as a little "thank you" for those folks who keep swinging by and checking out my little corner of the Nerdoverse!

Posted by Unknown at 2:02 PM No comments:

Email ThisBlogThis!Share to TwitterShare to FacebookShare to Pinterest
Labels: 1500 pageviews, pencils, sketch, thank you, the crow

Inspired & recharged by ECCC! I was introduced to Bill Sienkiewicz by a mutual friend, and was definitely a bit starstruck! Such an incredibly nice dude.

I wound up getting an impromptu sketchbook review, critique and encouragement from Philip Tan, which was an experience nothing short of awesome. How often do you get a chance to have your work reviewed by someone of that caliber? I have a lot of work to do, but I most definitely plan on taking his advice to heart. 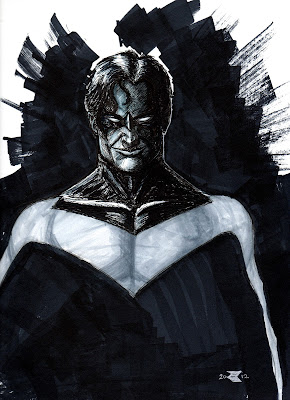 I finally had an opportunity to talk with Darick Robertson again this year. Several years ago,  I happened upon Darick at ECCC '06 at a moment when there wasn't any line at his table. This was when I was still unable to do my artwork, and I was slowly dying inside, working at a call center job doing collections. I was in an incredibly low spot in my life, even if I didn't necessarily let it on, but I'm sure everyone around me could feel it - especially my loved ones. The tension around me was almost palpable. I was in pain almost all the time, and every day only served to remind me of how I wasn't ever going to be right again. I loved Comicon, but it was also a painful reminder of unfulfilled dreams. Darick took the time to listen to my story, and we wound up talking for a little over a half hour. He gave me encouragement and told me not to give up, and that was my first step back on the path to being an artist again. He did a sketch for me while we were talking, of Spider Jerusalem flipping the bird to the world, and that almost personified my inspiration. I had the sketch tattooed on my chest, and it has become my best foot forward ever since, a secret "fuck you" to the world that told me that I needed to conform, that I could never draw again, or walk right, or be free of daily pain.

It was three years from then before I could actively draw again, and that first drawing took me nearly 6 months to finish. Since then I've been published in 2 books and a magazine, and things are definitely looking up. I finally was able to let him know how much his time and his words meant to me, and thank him for being such an inspiration. He passed along some more sage advice, which is now burned into my mind - Don't worry about what other people are doing. Don't compare yourself to them. There are always going to be people out there that are better that you, and worse than you. That's irrelevant. The important thing is that you find your own voice and do what YOU want to do.

Nervously, I presented him a Nightwing piece which I had done a couple nights prior at the ECCC kickoff dinner & finished up at home afterwards, as a token of my gratitude. He told me that he thought the piece was really good, and asked if I would make it out to him, which completely blew my mind. It would be like Jimi Hendrix telling you that he liked your music and asking if you would personalize a CD for him. It was a moment where it felt like the universe was telling me that I was doing the right thing, and moving in the direction I was meant to go. I doubt that you'll ever read this, but on the tiny chance that you do, thank you from the bottom of my heart, Darick.

OK, now I'm done being all maudlin and shit. Here's a sketch of a pissed off New 52 Darkseid ;)


About 90 minutes or so into this. Feel free to contact me if anyone might be interested in a purchase. I'll be doing my damnedest to do something along these lines on a daily basis from here on out.