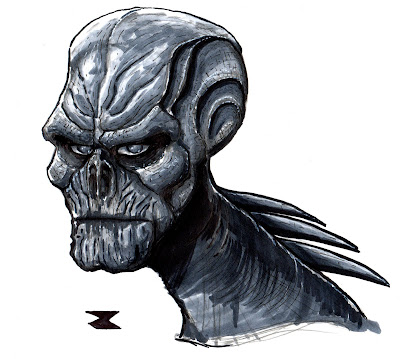 My second piece with the mighty, mighty Copics. Yeah, I'm really starting to develop an almost unhealthy infatuation with these things. First markers that I've found that aren't splotchy and a giant pain in my ass to use. Added bonus is that the greyscale makes colorization in Photoshop  easy as hell!Did this on & off for about 3 hours or so during my regular tabletop game. Sounds like were going to use this for the next Carmine expansion as a new type of Taligar.

Hey all. So I finally had a chance to take my new Copic markers for a spin, and I gotta say, I LOVE them so far. I knocked this one out during my downtime working at the store today. Not too shabby for a first stab with a new medium. =D 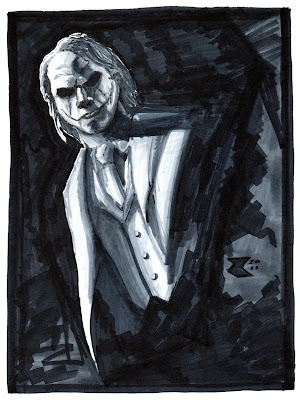 If any of you guys are marker experts out there, feel free to critique and leave tips for my future endeavors! LOL
Posted by Unknown at 7:39 PM No comments:

As you eagle eyed reader might notice, this isn't technically a new post. The labels for the original post had gotten jacked up somehow, and in my editing to fix it, blogspot decided to post it as new. *shrug*
Knocked these out during game last night. Finished up the Captain America that I'd started at the last game session & started to work on Thor. 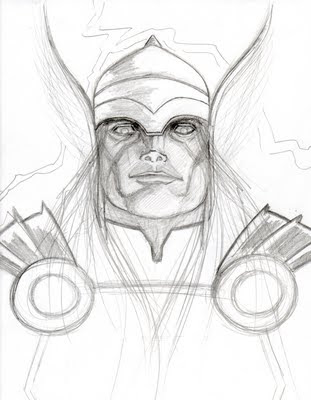 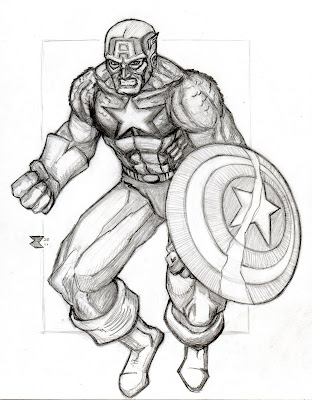 Finally got some Copics!

I discovered the joy that is Dick Blick's Art supplies on Capitol Hill in Seattle today. Racheal and I were coming back from the SIFF Secret Festival (which I totally can't talk about), when I saw the brick & mortar Valhalla. I've been checking out the website for years now, but I had no clue that they had a physical location in town! Anyway, I finally picked up a handful of grey tone Copic Sketch markers that I've been dying to get my hands on for ages now. I fully expect that I'll be posting up some experiments relatively shortly.

Sadly, their entire inventory of Copic Multiliner SP's were stolen...:/
Posted by Unknown at 3:01 PM No comments:

I just got back from my midnight showing of Thor, and wanted to get my initial reactions down before they are lost in a sleepy haze. Just as a heads up, this review is pretty much spoiler-free. Saw it in digital IMAX 3D (not by choice), which I honestly feel takes away from the movie quite a bit as it wasn't used to any great effect & made many of the action and tracking shots blurry. The DLP projected picture came out visibly pixelated, which was only exacerbated by the mediocre 3D effects. If you really want to see this movie in its full glory, go check it out in 2D.


Let me preface this with the following: Thor is no Iron Man, but it comes pretty close.


I thought Thor was very solid film and a great deal of fun to watch, although it was, in my opinion, the least approachable of the Marvel movies thus far. Most of the earlier Marvel films do a really nice job of holding your hand and explaining every little facet of what's going on so that the casual movie-goer can come in, plunk down their ten bucks, and leave with summer blockbuster jitters. Thor takes a different tack.


Thor is very thick with references and easter eggs, but fairly thin on explanation. I feel that they made this film with the expectation that the people watching are already familiar with the universe and the players involved, so do not waste much time on introduction. With Thor being a bit less mainstream of a character for your average fan though, Branagh could have spent a bit more time on helping the viewer understand the world and the cast of supporting characters better. He did a wonderful job, however, in making this movie and the subject matter truly feel epic. The set pieces are appropriately out of this world. Whosoever designed Asgard is worthy of wielding Mjolnir, indeed!


The action is great & it has some great comedic moments as well, without making the movie feel campy or goofy. Chris Hemsworth made a great Thor, with a fantastic mix of equal parts confusion, arrogance, bravado and dashing bluster. He also does hell of a job filling out the armor. Anthony Hopkins was awesome as Odin, but that nearly goes without saying, as this role is right up his alley. I truly enjoyed the hell out of the subtlety of Tom Hiddleston's performance as Loki, and am greatly looking forward to his role as the big, bad villain in The Avengers. Natalie Portman as Jane Foster had some of the best lines and reactions in the movie though. Definitely a good step in the right direction for making up for the Star Wars prequels. LOL


I don't want to ruin/spoil anything but let me just say right now that the fight with the Destroyer was AWESOME! You'll know what I'm talking about when you see it.


Personally, I think Thor is a great watch and definitely recommend checking it out in the theater, but I'm looking forward to seeing if there's a director's cut release when it comes out on Blu-ray with some more footage.
Posted by Unknown at 3:33 AM No comments:

I'm seeing the midnight showing of Thor tonight at Alderwood with some friends. Review after I get back. =)
Posted by Unknown at 10:12 PM No comments: 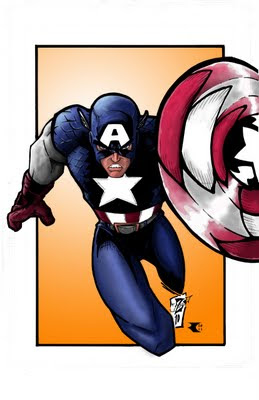 Hey folks. OK, I know this isn't technically a sketch, but it IS what I worked on today. =) My friend, the very talented Jazel Paul Riley asked me to color one of his pieces if I got bored or otherwise found some time on my hands. Well, I saw this awesome Captain America pinup that he posted up on Facebook the other day, and the rest is history!

I gotta say that I had a blast with this piece. This is actually the first time that someone else has asked me to paint their work, and it was an honor & a pleasure. Hell, I might start taking requests! LOL

I'm not sure exactly how much time I have into this offhand, but I'd estimate a good 4 hours or so in Photoshop CS3..

"MLK made a new quote today. Holy shit, he IS risen!" or "Why you should do research before you parrot shit on your Facebook or Twitter feed"

I love quotes. Nothing sums up an event perfectly quite like a well-timed quote. Today seemed like no exception when Osama bin Laden's supposed death (pics or it didn't happen!) sparked the greater collective of the internet hive mind into action by throwing the following quote up on their Twitter or Facebook feeds,

‎"I mourn the loss of thousands of precious lives, but I will not rejoice in the death of one, not even an enemy. Returning hate for hate multiplies hate, adding deeper darkness to a night already devoid of stars. Darkness cannot drive out darkness: only light can do that. Hate cannot drive out hate: only love can do that." ~ Martin Luther King Jr

Well, it's a nice sentiment, albeit a bit naively idealogical while being bitingly topical. At face value, it seems to be the perfect quote, the VERY thing to be said about this particular moment in time, by one of the greatest men in our recent history. The problem? MLK never said it. At least not all of it.

The part that's so amazingly topical...you know, the "I mourn the loss of thousands of precious lives, but I will not rejoice in the death of one, not even an enemy" part? Yep...not MLK. That bit was made up somewhere in the Twitterverse, before going viral across the in-tard-net. Now if you try to google any chunk of that particular phrase, you're bombarded with nothing but page after page of Twitter feeds and Facebook updates. People have filled their Tumblrs, flogged their Flickrs, and blogged their blogging hearts out, and all without having done one iota of research.

Now that's not to say that at least part of it wasn't legit. The rest of the quote was indeed part of a sermon delivered by the Reverend Doctor on finding forgiveness, delivered at the Dexter Avenue Baptist Church in Montgomery, Alabama on Christmas in the year 1957. I won't (mis)quote Martin Luther King's speech - that's already been done enough today. If I may be allowed, however, to paraphrase what was said so much today as my own personal commentary:

‎"I mourn the loss of thousands of precious brain cells, as a shocked populace struggles to express itself, and finds twitter. Returning ignorance for ignorance multiplies ignorance, adding deeper darkness to a night already devoid of stars. Darkness cannot drive out darkness: only light can do that. Ignorance cannot drive out ignorance: only research can do that, so read a goddamn book already, you dumb bastards." RC